As the powdered bits of Old Ones, the remains of the bone table and Cutler’s wolf puppet, not to mention vaporised baby Eve and a smidge of stale vegetable oil, settle on and around whatever is left of Stokers what do we have to look forward to?

Well, as per usual at this stage we don’t know much at all!  Toby Whithouse has said three things online and in his Q&A on the BBC Blog which sound vaguely definitive and which may or may not actually be going to happen…

Firstly, Hal, Tom and Alex will all be back for series five.

Secondly, CutlerNickCutler is proper dead.  Toby says.  Now I’ve said this before and at the risk of being boring I will say it again.  (And it’s an excuse for a picture!) 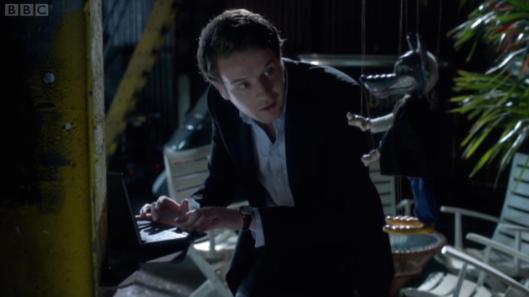 Thirdly, they will still be in Honolulu Heights.  With that carpet.  All those ground in stains – dead policemen, a variety of powdered vampires and then all the bits of medium rare flesh Cutler left behind.  I hope they have a Bex Bissell and an ocean of carpet shampoo…

Oh – and fourthly, or thirdly and a bit, Toby claims to have ‘forgotten’ that Hetty was lead to safety before Tom’s Bomb splattered the Old Ones.  Yes dear.  Of course you did.

No plans for Hetty then…

A hint left on the Blog was a final scroll

As I said at the time that is annoyingly enigmatic…

Maybe it’s Mr Snow – at 3000 years old can he really be proper dead with a few bottles of old chip oil?

Could it be Hal?  He’s an Old One at 500 years plus but has been semi-retired in a vampire sense.  Time for him to do his thing?  Or a thing?  Some sort of thing?

I suspect it’s someone we haven’t seen before – and the moment I can’t decide if it’s someone good or bad.  It’s not specific.  In fact it might not even be a vampire at all. Now there’s something to ponder…

More fun than what we know – especially as it’s so little – is what we think might happen. 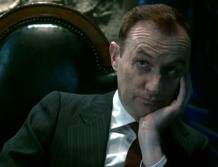 The Old Ones.  Presumably splattered into unreconstructable atoms.  Although one vampire did lead Hetty out before the bomb so was that really the last of them?  And can 3000 year old Mr Snow really be gone that easily?  Might take a while to recover (and a hefty reel of elastoplast) but I think it’s possible.  Anyway – maybe not all the Old Ones were there.  Even the most complacent of potential world dictators wouldn’t put all his vamps in one container. Surely?  I think there are more – some like Hal have been hiding and some just don’t play well with others.

Whatever that game of vampire hopscotch was that they were playing with the lines and the squares – was it completed?  Did they get through enough of a ritual to create something?  He will rise – maybe the bone table was more important than we thought.

Milo got away and made sure Tom did.  Just because they are both WWs or because he could see the writing on the wall, he likes to be on the winning side.  He’s an interesting character, a werewolf in league with vampires because it suited him, and he was prepared to go through unspecified but presumably nasty tasks to get there.  Now Tully was a bit of a bastard but he didn’t go that far.  What next for Milo?  Has he made enemies who might come looking for him?  We’ve not had a threat from the werewolves before.

Maybe Cutler was on the right lines…

There will be a series arc and it will be something of significance beyond the kitsch confines of HH.  That’s my interpretation of what was said in the Q&A.  Toby was quite clear that Being Human has moved on from the domestic settings of the first series and that it will continue to move on.

What about a Hal/Alex romance?  I really hope not – we’ve been there with Mitchell and Annie and it was singularly unconvincing, cross species relationships are bound to be – well, unfulfilling.  There may have been an attraction when they met but I think Hal has pretty much done for that by his bizarre behaviour, from eejit to slimeball without visible effort!  He finally put the tin hat on it by drinking her blood after his mate killed her.  Oh and he tied the hat on with a ribbon by lapping up the rancid, congealed, maggoty blood her corpse left behind…  Nice.  The man from Milk Tray had nothing on that! 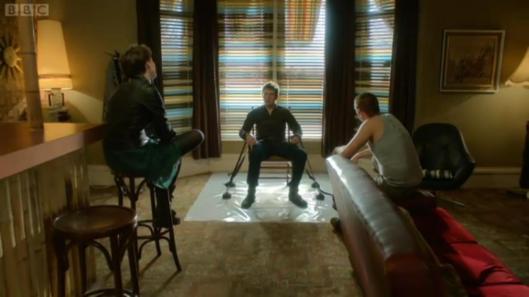 Hal was detoxing when we left them.  How long does that take – Carl told Mitchell six months but Hal’s only had two glasses of blood (and a puddle) after fifty-five years.  I wonder if that makes it better or worse?

Actually – here’s a thought.  That burn on Hal’s arm.  Has he still got it or did those few mouthfuls of blood cure it?

All of series five with Hal tied to a chair would be beyond boring in dramatic terms, rather like multiple episodes of sitting on a sofa eating pizza but I suppose someone might like it…

The men in grey.  A tease or a possible feature in series five?  Who knows?  I’d like to see more of them; I was very intrigued by Mr Rook and his cheery archivist.  I certainly would like to have a rummage through those boxes!

Mr Rook explained their role as the domestics, clearing up after the supernatural – and they cleaned up after Cutler’s abortive attempt to expose werewolves.  It seems they are an organisation that is unknown to the supernatural world – to Hal certainly – and Cutler had no idea why he hadn’t made the news.  The archive contains evidence from ‘unexplained’ events – the clipboard (and there’s been a lot of freeze framing here!) lists events with references that include familiar places like B. Edwards, Windsor Terrace and the Kemp/Jaggat facility.  Which explains who cleared up after Mitchell chomped his way through the bible boys…  One thing that strikes me is that they list Types 0 though 4.  If Type 0 is human then they are missing at least two more columns – succubus and demon.

“Well in that case, we’re going to need a different form…”

What exactly is Mr Rook? We’re shown him reflected in a mirror so he’s not a vampire, and while I’m quite sure he know that Alex and Hal were there I’m not sure if he could see her or not.  Human or not?  He has a strangely timeless feel about him, there’s a feeling that he’s been around for a very long time.  He’s psychic at the very least – and influential!  Meetings with the Secretary of State indeed… I wonder which one?

Of course the MiG are probably a red (grey) herring and there’s a better than even chance that “He will rise” is another one.

One thing I am sure of is that we’ll be surprised – and hopefully delighted!

I just don’t want to wait a whole year…